As an expat in the vicinity of Eindhoven you may wonder how it is possible that there is one overcrowded outdoor swimming pool for the entire city. If that is what you actually thought, then you are wrong: besides the Ottenbad in Woensel there is also De IJzeren Man (The Iron Man). But you are right: for a city like Eindhoven there should be more outdoor swimming water. The biggest secret of Eindhoven is that the city has an additional outdoor pool, but the city council has decided not to fill it with water.

Rushed decision
Imagine: there is an existing construction of swimming pools, slides, showers, locker rooms and so on. Imagine that you closed this accommodation a year and a half ago because you necessarily wanted something new and it needed to be planned fast as the elections were coming. But now, july 2018, you come to discover that ultimately it would be even more expensive than plan promotors predicted.

Tongelreep outdoor swimming pool as it is ( july ’18 )

It is almost impossible to imagine that in the capital of Brainport after one and a half years, and two hot summers, nobody has the political courage to refill the swimming pools for a few months. The Eindhoven municipal council prefers to first re-examine the costs of a new accommodation while the Eindhoven youth longs for water fun.

Perhaps you, as an expat, want to write a small note to the municipality. Feel free to write that water fun (you know, slides and such) and lying in the sun is a welcome addition for many families and teenagers. What’s more, it helps to keep your teenage son or daughter away from drinking and drugs as they do not get bored during the holidays. 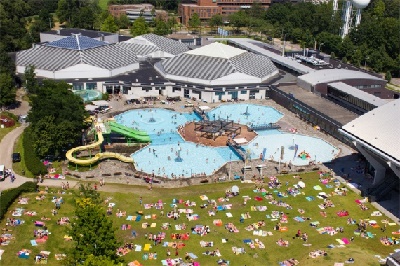 Perhaps, if you do write a small supplication, our municipal authorities will understand that investing in the air purification of an underground car park or proposals for legal cannabis cultivation is less logical than a small financial boost for an old-fashioned outdoor pool.